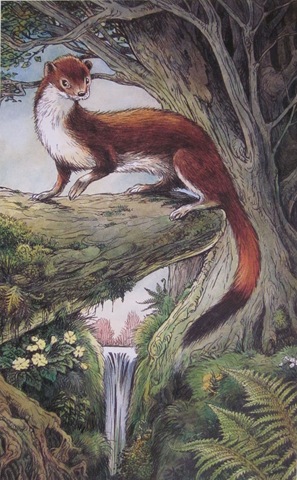 It’s fascinating to me, in so many ways, how Paganism has grown and changed in the few short decades since, just about the time that I was born, Doreen Valiente and Gerald Gardner reintroduced it to the Western world. In some ways, the Witchcraft that I practice today, on the banks of the Potomac River, is as different from Gardnerian Wicca as Gerald Gardner’s practice was from rituals enacted by the builders of Stonehenge (and we know very little about their practice. But I’m willing to bet it had no borrowings from Crowley, although Crowley may, or may not, have stumbled upon some of theirs. And round and round and round we go.) And, yet, there is something profoundly ancient and connected that everyone feels when they set the soles of their feet and the far-focused cells of their eyes upon THE LAND. And, at that level, what I do in 21st Century America — what Valiente did in 20th Century England, what my great-great-many-times-great grandmother did in a cave in ancient Sweden — has always been “the same” religion (even when, for my Methodist grandmother, it took place in a small church at the foot of the Rockies, making music on an old and wheezey organ).

One way that Paganism is growing/changing/morphing/transmuting is to become, in many ways, more local. If you read books from the 1970s/1980s, you’ll see a Paganism focused upon either the Old Goddesses/Gods of Britain or upon some other particular pantheon, often Kermetic or Greco-Roman. And my own personal opinion, which is mine, is that those Goddesses/Gods aren’t going anywhere. They’re growing stronger and more present and will continue to be so — as will the Hindu/Buddhist pantheons, and the increasingly modernized loa out of Africa, and a resurgence of some of the Goddesses/Gods of the American SouthWest/South American pantheon. And, that’s the thing. Earth is crammed, not a someone once said, with Heaven, but with Goddesses/Gods. But for a growing group of modern Pagans, Earth is crammed with local Goddesses/Gods, with Goddesses/Gods adapted to local practice.

And, for a growing group of modern Pagans, the Goddess Columbia is coming to represent that devotion to local practice. Columbia is a modern (as in, from the last 300 years or so) American Goddess. While her roots run back to Libertas and forwards to Marianne, (and, as my trance work with her has shown, back to the sovereignty of the land that the ancient cave bears embodied for Arhturian England), she exists today as a symbol of what is and can be good about America.

On Independence Day 2011, I did a series of trance workings with Columbia to learn more about her. I live only a few miles from her giant statue (entitled Freedom Triumphant in War and Peace) atop the United States Capitol. I see her every morning as I come across the Potomac River, leaving my Witch’s cottage and putting on the robes of a lawyer. She stands silhouetted against every sunset I see when I leave work on the Hill or dinner with friends. More than that, her statue stands on my altar, I come into sacred space meditating upon the base of her shield and her sandaled feet in the waters of the Potomac and the office buildings and bodegas of my City. And I felt that I needed to know her better, to get to know Who She Is, to learn, as I still need to do, her story.

I’ve recounted in prior posts how she revealed herself to me: Green Woman (High Priestess), Cave Bear (Queen of Pentacles), Ecstasy (Five of Cups).

I understood Columbia as Cave Bear (Often linked to Arthurian legend, the Bear remains a symbol of the power and protection of the land. Reading Points: Richness and plenty surround you. Your bounty and welcoming nature make you popular with all. Many depend on you, and your natural sensuality makes you powerfully attractive to others. Pragmatism and generosity open doorways at every point).

And I understood Columbia as Green Woman (In the Arthurian tradition, she validates the kingship of Arthur by bringing him the sacred sword, and establishes him as the guardian of the Hallows of Britain, sometimes appearing as the Lady of the Lake, who fosters . . . Arthur himself as well as the young hero Lancelot. In other stories, she manifests as the Flower Bride, sought after by more than one of Arthur’s great knights and offering the deep bonds of matrimony and joy to those with whom she shares her bounty. At its heart, her sacred role is the initiator of the human individual into the realm of the Wildwood.).

Columbia surprised me when she showed up as Ecstasy: a young woman still in the full thrill of her powers, lost in the dance, still as much used by the Power as she uses the Power. I blogged about my encounter with Her as Ecstasy here.

As I often do when I pull a Tarot card that surprises me, I sat for a long time with Columbia as Ecstasy. Then, I asked: “Really? That surprises me. What else can you tell me about yourself as a young person, about yourself as Ecstasy?” Then, I pulled another card. I pulled Stoat: Page of Bows. (In the Wild Wood Tarot, Bows correspond to Wands). Here’s what “the book” says:

MEANING: With a fierce hunting instinct and its ability to live underground, combined with the changing colour of its fur from white to red and its black tail (the three sacred colors of the ancient world), the Stoat has strong mystical links to the sovereignity of the land.

READIND POINTS: Often, you are seen as an emissary and, as such, your gifts are widely recognized and honored. Your ability to perceive the truth in almost any matter is vastly helpful and your freedom of spirit marks you out as an original and unique personality.

Wikipedia says that the stoat: “[I]s listed among the 100 “world’s worst alien invasive species”. And, “The root word for ‘stoat’ is likely either the Belgic word stout, meaning ‘bold,’ or the Gothic word stautan, meaning ‘to push.'” Sounds right to me.

So, there you are. Sovereignity of the Land tied into the youthful spirit of a Page. Freedom of Spirit tied into something original. A tendency to invasiveness. Columbia could hardly be more clear.

This sweet Goddess is still finding herself, finding her followers, finding a way to Be in a Land to which She was transported, where she wears a blanket, but also blood, from the First People here (as the Goddesses/Gods of Britain wear blood from the First Peoples there whom they pushed under the Hills). And, when you think about it, Aint’ that America?

A devotee of this Goddess, I’m figuring it out along with Her and I cherish her willingness to admit that She’s still working it out with a rattle, dancing in a circumscribed circle. I’m going to have to spend some time figuring out what this means in terms of Her worship, in terms of what it means for her erstwhile priestess on the banks of the Potomac. What are your thoughts?

I have one more post in this series. Stay tuned.

Like Loading...
This entry was posted in Uncategorized and tagged Columbia, Paganism, Tarot, Wicca. Bookmark the permalink.