won’t you celebrate with me

won’t you celebrate with me
what i have shaped into
a kind of life? i had no model.
born in babylon
both nonwhite and woman
what did i see to be except myself?
i made it up
here on this bridge between
starshine and clay,
my one hand holding tight
my other hand; come celebrate
with me that everyday
something has tried to kill me
and has failed.

Former Poet Laureate Philip Levine has slipped between the veils.

May the Goddess guard him. May he find his way to the Summerlands. May his friends and family know peace.

He was 14 when he began working in auto factories, a formative experience that would inspire his work even after he left Detroit in the 1950s to pursue writing.

Detroit and the struggles of the working class were persistent themes in his work as he aspired to “find a voice for the voiceless.”

“You grow up in a place and it becomes the arena of your discovery,” he told the Detroit Free Press in 2011. “It also became the arena of my discovery of the nature of American capitalism and the sense of how ordinary people have no choice at all in how they’re going to be formed by the society. My politics were formed by the city.”

Here’s his poem, Burial Rites, which I think says what he wanted to say about his own death:

Everyone comes back here to die
as I will soon. The place feels right
since it’s half dead to begin with.
Even on a rare morning of rain,
like this morning, with the low sky
hoarding its riches except for
a few mock tears, the hard ground
accepts nothing. Six years ago
I buried my mother’s ashes
beside a young lilac that’s now
taller than I, and stuck the stub
of a rosebush into her dirt,
where like everything else not
human it thrives. The small blossoms
never unfurl; whatever they know
they keep to themselves until
a morning rain or a night wind
pares the petals down to nothing.
Even the neighbor cat who shits
daily on the paths and then hides
deep in the jungle of the weeds
refuses to purr. Whatever’s here
is just here, and nowhere else,
so it’s right to end up beside
the woman who bore me, to shovel
into the dirt whatever’s left
and leave only a name for some-
one who wants it. Think of it,
my name, no longer a portion
of me, no longer inflated
or bruised, no longer stewing
in a rich compost of memory
or the simpler one of bone shards,
dirt, kitty litter, wood ashes,
the roots of the eucalyptus
I planted in ’73,
a tiny me taking nothing,
giving nothing, and free at last.

I think this poem shows how, all the way through to the end, he lived in his own landbase, a land base rich with lilacs, roses, hummus rich with bones, and eucalyptus. And, Goddess knows, I respect that.

Do I hope that, in death, he is free of his land base, taking nothing, giving nothing, and free at last? I just don’t even think it’s possible. But I do hope that he’s free.

Tagged May the Goddess Guard Him, Poetry

Posted on February 4, 2015 by Hecate Demeter | Leave a comment

You Are So Sure

you are so sure of love
you are so young
and i too old to learn of love.

the rain exploding
in the air is love
the grass excreting her
green wax is love
and stones remembering
past steps is love,
but you. you are too young
for love
and i too old.

once. what does it matter
when or who, i knew
of love.
i fixed my body
under his and went
to sleep in love
all trace of me
was wiped away

forgive me if i smile
young heiress of a naked dream
you are so young
and i too old to learn of love.

Picture of the poet found here.

Posted on February 1, 2015 by Hecate Demeter | Leave a comment

On this day when we honor the Goddess Brigid, patron Goddess of poets, I thought I’d share this lovely mash-up of poetry and dance.

May Spring begin to move within you. 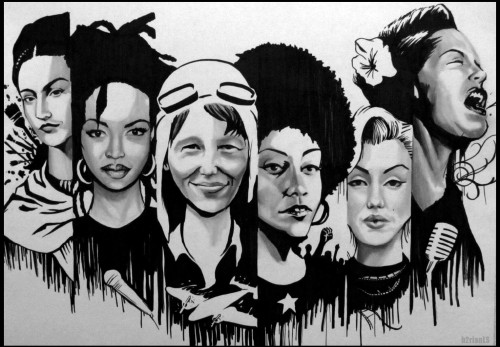 Wednesday Poetry Blogging: You Were Chosen, Too, to Put the World Together

I have lately come to the conclusion that I am Eve,
alias Mrs. Adam. You know, there is no account
of her death in the Bible, and why am I not Eve?
Emily Dickinson in a letter,
12 January, 1846

Wake up,
you’ll need your wits about you.
This is not a dream,
but a woman who loves you, speaking.

She was there
when you cried out;
she brushed the terror away.
She knew
when it was time to sin.
You were wise
to let her handle it,
and leave that place.

We couldn’t speak at first
for the bitter knowledge,
the sweet taste of memory
on our tongues.

Listen, it’s time.
You were chosen too,
to put the world together.