That Which Isn’t Flint Is Tinder

Posted on January 2, 2012 by Hecate Demeter | Leave a comment 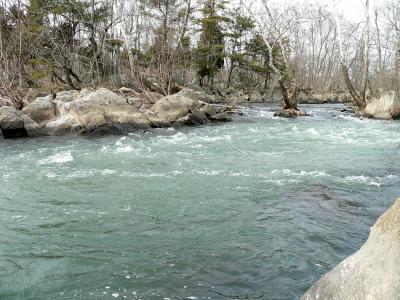 If the landscape reveals one certainty, it is that the extravagant gesture is the very stuff of creation.  After the one extravagant gesture of creation in the first place, the universe has continued to deal exclusively in extravagances, flinging intricacies and colossi down aeons of emptiness, heaping profusion on profligacies with ever-fresh vigor.  The whole show has been on fire from the word go.  I come down to the water to cool my eyes.  But everywhere I look I see fire; that which isn’t flint is tinder, and the whole world sparks and flames.

It finally turned really cold today.  I spent most of it walking, sitting, and paying attention along the banks of the Potomac River.  I needed it.  May it be so for you. 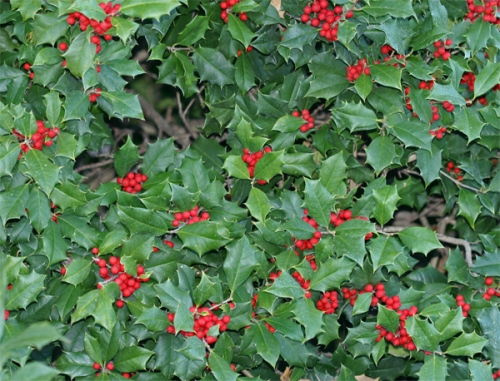 As regular readers know, I’ve worked to turn my morning commute from northern Virginia into downtown DC into a major part of my spiritual practice. I have several routes that I could use to go to work. I choose the route that runs past Spout Run, the Potomac River, and “my” homeless vet because, while not the quickest, this is the route that feeds my soul. I’m in love with every weed and scrubby shrub that I pass. I’m in relationship with a homeless vet whose life couldn’t be more different from mine.

This morning, as I sat in traffic (this turns what would be a bane into a blessing) I had time to be present with and to admire all of the holly berries growing alongside Spout Run. As Landscape Guy mentioned to me some time ago, this, for whatever reason, is quite the year for berries.

The trees between Spout Run and the road are stunted, broken, scrubby. But every holly tree is full of bright red berries.

And, so, as I head into another intense day of law, I spend a few minutes deep in nature, appreciating berries red as blood.

May it be so for you. 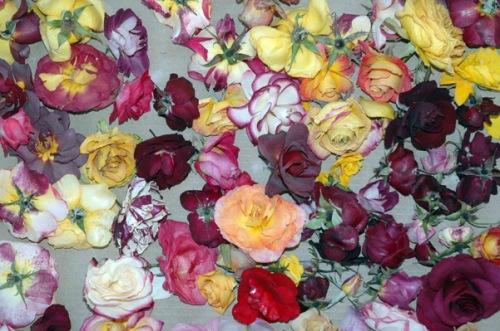 So I’m still on a steep learning curve with WordPress; I remind myself that it’s good for us old women to keep challenging our brains. Thanks to so many of you for following me over here, subscribing, and commenting. If you’ve been kind enough to list me in your blog roll (for which, thanks!) I’d be very grateful if you’d update the information. This blog address is: http://www.hecatedemeter.wordpress.com. Many, many thanks.

Last night, I celebrated Litha with my Sisters. One of them mentioned that, although she had worked that day, she’d teased her co-workers that she should have been off for her religious holiday. I was thinking today that (at least when, as last night, I’m not hosting the ritual at my place) I’d really rather have the day after off. (In my line of work, it doesn’t matter; when stuff is due, you work. And stuff is usually due. If it’s not, I can “work from home” any time without giving a reason.) Doing magic, no matter how much I ground afterwards, leaves me a little bit high and too full of energy to drop off to sleep until several hours, at least, afterwards. And I’m old enough that not enough sleep can make a big difference the next morning and all through the next day. Do you take time off around the high holy days? Which would you prefer: the holy day or the day after?

Peter Dybing and Chas Clifton have been fighting fires (speaking of people whose jobs don’t recognize high holy days). May the Goddess bless and protect all of those brave people who are working hard to deal with the wildfires caused by (and problematic because of) overpopulation and global climate change. We need, as a body politic, to acknowledge what they do and to pay them, pension them, and support them as they deserve.

Chas is working to revive the worship of a rain God, possibly local to his area. I’m not familiar with Tlaloc, but I’m intrigued by Chas’ work. One of the things that I realized a few years ago was that I needed to develop a serious relationship with Columbia, the Goddess for whom my metropolitan area is named. Her giant statue (named Freedom) towers over my city, atop the United States Capitol, and reminds me every time that I go to Capitol Hill that this city of power is dedicated to a Goddess of freedom, justice, civic responsibility. I call her daily at my altar. I often begin by imagining her sandaled feet in the Potomac River, but she almost always responds by appearing in a busy NE neighborhood, her feet in a 7-11-clone store (where busy moms buy milk, construction workers buy hot dogs, and kids buy slurpees and junk food) and her shield set down in a community garden where people garden who live in several-hundred-year-old townhomes, in what we call here “English basements.” Although my primary worship is to a Greek Goddess, likely out of Anatolia, as interpreted by English playwrights, I do think that it’s crucial to develop a relationship with local deities. I’m going to follow Chas’ work with interest. (Capricious beings, rain Gods and Goddess, in my humble experience). Do you connect to/include in your regular practice any local deities? If not, why not? Could you?

Starhawk is moving ahead with plans to film The Fifth Sacred Thing. As I’ve said before, it’s one of those things that, if done well, would be amazing. If “Hollywood” and “Money” take over, it could be incredibly disappointing. Avatar disappointed some of my friends, but it showed that there’s an untapped hunger in “general audiences” for a spirituality that connects to place, planet, polis. And Starhawk, like Derrick Jensen and Richard Louv, realizes that we’ve got to give people a positive vision towards which they can work. If all we show is that WE’RE DOOMED (and we may well be), it only makes sense for people to retreat into video games, creature comforts (after all, giving up one SUV won’t make any real difference), a spirituality that disengages from all that is manifest. I’m going to throw a little bit of energy, in the form of cash, her way. If (and only if) you’ve got a steady source of income, some money in savings, and your expenses under control, you might consider doing the same.

Ellen Dugan has some great advice about finding a coven.

Alison’s gone camping with the Christians. I’ll be interested in her follow-up report.

Anyone read Richard Louv’s new book? I’m going to add it to my tabletob in the hopes that I’ll get to it soon.